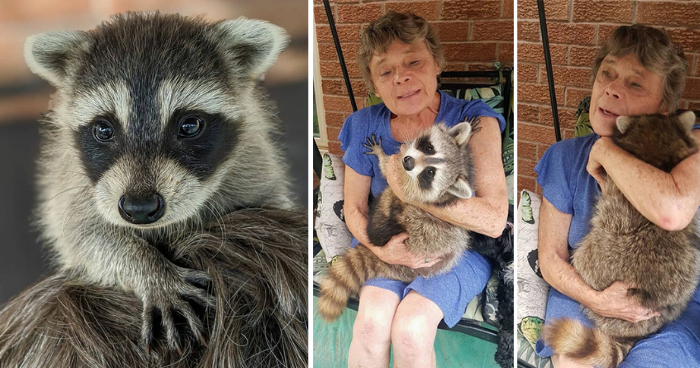 Three years ago, a woman named Nikki Robinson rescued a tiny raccoon on the side of the road. The animal was no more than four weeks old.

The woman tried to take the raccoon to wildlife rescue centers, but was turned away everywhere. She had to take the baby home. Fortunately, Nikki’s mom already had experience rescuing raccoons.

The animal was named Little Hans. Linda, Nikki’s mother, says she had never seen such an affectionate and cute raccoon.

“I always wanted to do wildlife rehab, but I was working full-time. Then I asked my mother to help with the feeding during the day,” Nikki says.

The mother was hesitant and had to be persuaded to take custody of the raccoon. But when this baby started eating from a bottle and looked her in the eye, he instantly became “mommy’s raccoon.”

For 2.5 months, the baby was bottle-fed. He came to his new home hungry and dehydrated, so he needed special care.

However, the animal was not raised as a pet. After 2.5 months, he was released into the wild so that the animal could live the full life of a raccoon.

But Little Hans kept coming to the house, though he did it less and less often. Women left him food to feed him.

This has been going on for three years. Sometimes the raccoon doesn’t come for a whole month, and then comes back again. But when he visits Linda, he always sits down next to her and waits to be petted.